Who killed Jack? Spotlight on The End of Camelot by @DianaLRubino #romanticsuspense

Guest post by Diana Rubino,
author of The End of Camelot.

This is going to date me, but I was six years old when President Kennedy was assassinated. Everyone who was alive that day knew exactly where they were and what they were doing when they heard the news. I was in my first grade classroom. The teacher got a call on the classroom phone and told us "the president was shot." A collective gasp went around the room. My grandmother was a huge JFK assassination buff. She’s the one who got me fascinated with this tragic event, at the time the biggest mystery since "who killed the princes in the Tower?" (I'm a Ricardian; that's for another post).  She got me embroiled right along with her.

She listened to all the radio talk shows (those who lived in the New York area might remember Long John Nebel, on WOR, WNBC, and WMCA, all on AM radio (FM was really "out there" at that time). She bought whatever books came out over the years, along with the Warren Commission Report, which I couldn't lift at the time, it was so heavy. But my interest never waned in the 52 years that followed.

In 2000, I began the third book of my New York Saga, set in 1963. The heroine is Vikki McGlory Ward, daughter of Billy McGlory, hero of the second book, BOOTLEG BROADWAY, set during Prohibition. This was my opportunity to write a novel showcasing all my current theories, and continue the saga. It took a minimum of research, since I remember all the 60's brands, (Bosco, Yum Berry, Mr. Bubble...), the fashions, the songs, and I even included a scene set on that unforgettable night when the Beatles first appeared on the Ed Sullivan Show, February 9, 1964. 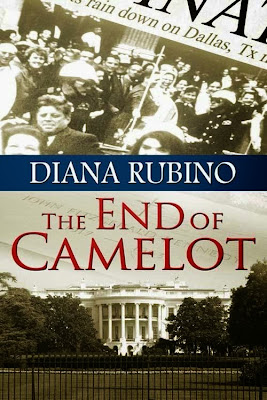 About THE END OF CAMELOT:

The third in the New York Saga, The End of Camelot centers on Billy McGlory’s daughter Vikki, whose husband is murdered trying to prevent the assassination of John F. Kennedy. Vikki uses her detective skills to trace the conspiracy, from New York to New Orleans to Dallas, and at the same time, tricks her husband’s murderer into a confession. A romance with her bodyguard makes her life complete.

November 22, 1963: The assassination of a president devastates America. But a phone call brings even more tragic news to Vikki Ward—her TV reporter husband was found dead in his Dallas hotel room that morning.

Finding his notes, Vikki realizes her husband was embroiled in the plot to kill JFK—but his mission was to prevent it. When the Dallas police rule his death accidental, Vikki vows to find out who was behind the murders of JFK and her husband. With the help of her father and godfather, she sets out to uncover the truth.

Aldobrandi Po, the bodyguard hired to protect Vikki, falls in love with her almost as soon as he sets eyes on her. But he's engaged to be married, and she’s still mourning her husband. Can they ever hope to find happiness in the wake of all this tragedy?

An excerpt from THE END OF CAMELOT:

Vikki entered her foyer and dropped her shopping bags on the floor. As she locked the door and kicked off her alligator pumps, the phone rang. She answered it in the kitchen, so she could raid the pastry box while she chatted.

“Vikki, it’s Linc Benjamin.” His ragged voice came over the line. “I have terrible news. Jack is dead.”

“What?” She couldn’t have heard right. “What did you say?”

She dropped the phone and slid down against the wall. Her glasses fell off her face. The room spun. Sunlight glared. She smelled the new coat of wax on the kitchen floor.

“Vikki? Vikki?” came faintly from the dangling receiver. She crawled over and grasped it. He would tell her it was a mistake, they had the wrong man, or it was another of Jack’s practical jokes.

“My Jack?” she whispered.

“Linc—no, please. Tell me it wasn’t Jack. Are you sure? There must be a mistake. Not Jack.” Her heart thudded like a hammer. A stabbing pain pierced her chest. She held the receiver away from her ear.

“Vikki, are you there?” His voice came through the earpiece. “If you want, I’ll be right over. I can tell you everything when I get there, or right now, whatever you want.”

“The Dallas police found him drowned in his hotel bathtub—”

“Dallas? What was he doing in Dallas? He’s supposed to be in Chicago doing a story on the FBI!” she screeched, beyond rational thought. No, this had to be a mistake!

“I don’t know, Vikki. The maid found him. The Dallas police tried to call you all morning, but you weren’t home, so they called here, at the network. Do you want me to come over and—”

“Wait!” She squeezed her eyes shut. “Now—where is he now?”

“Parkland Hospital. They’re going to bring the bod—er, bring him back to New York after the autopsy.” His voice broke again. “God, Vikki, I’m so sorry. I feel like I lost my brother.”

She went blank, too stunned to think. Her hands shook so much she could hardly hold the phone.

“Vikki, do you want me to come over—”

“No.” She released the receiver. It swung away and banged against the wall. She curled up on the floor as the ticking clock echoed the thudding of her heart.

She wept in unbearable grief. Shutting her eyes tight, she cradled her head in her arms. A jumble of thoughts rendered her helpless.

“Please, God,” she prayed, “Let it be a mistake and Jack will come walking through the door.”

The doorbell rang. “Jack?” She forced her eyes open.

Her head throbbed with each pound on the door.

The voice was her father’s, and as much as she wanted him with her, holding her, rocking her, the present was too much to bear. She wanted one last visit to the past with Jack, happy and alive and free from harm.

But the raw truth seared her soul: The past is gone, and so is your beloved Jack!

Too weak to walk, she crawled to the door, reached up, and unlocked it.

Her father rushed in and knelt beside her. “Vikki, honey?”

She collapsed into his arms, heaving gut-wrenching sobs.

“It’s okay, I’m here,” he crooned, like he was singing the songs he wrote for her.

“Dad, Jack—” She couldn’t bring herself to say it yet. The words were too ugly, too real.

“Yeah, I know. He got shot. When I looked in the sidelight and saw you lying on the floor, I thought you were hurt.”

She gulped. “I answered the phone and it was…” That seemed like a hundred years ago already.

He helped her up, and she forced herself to gulp enough air to stay conscious while he said, “I’ll turn on the TV and see what the news says about the shooting—”

“Vikki, here, let me get you on the couch. Come on, babe, that’s it.” He helped her off with her coat. “Now, what are you saying?”

“I know.” He nodded. “JFK was shot in the head. The governor of Texas was shot, too.”

“No. My Jack! They found him—” Sobs burst from the depths of her soul.

Unable to speak any further, she nodded.

“Something happened to him?” He sat her down on the couch.

She drew in a ragged breath and he grasped her hands.

“Oh, God. Oh, Jesus Christ, Vikki.” He held her and stroked her hair as she sobbed, her tears staining his scarf. “Okay, Dad’s here, I’ll stay with you. I’m sorry, I thought you were talking about President Kennedy. He just got shot.”

“President Kennedy?” She shook her head in disbelief. “No. Jack’s friend from the network called, and—” She couldn’t go on.

“Don’t talk. I’ll get you a brandy or something.” He glanced over at her liquor cabinet.

She didn’t even want him leaving her for a few seconds. He hung her phone up and it started ringing instantly. She heard spurts of conversation. His voice sounded like an echo in a marble tomb. He finally stopped talking and came back with a brandy bottle, a snifter, and her eyeglasses. “I found your glasses on the floor.” He took her into his arms and rocked her back and forth. “You’ll be okay, you’re strong, you’re my girl,” he murmured, and she wished he’d sing to her.

Instead he explained that President Kennedy had been shot on the motorcade route in Dallas.