The Business of Writing: How much time it takes to create a DIY book cover by @Liza0Connor

Welcome to the final installment of a 3-part series on DIY book covers by my author-friend Liza O'Connor.

If you missed part 1 about The Basics, you would be well advised to read this post. And I have found a page of royalty-free and cost-free stock photos, vectors, and video clips courtesy of Depositphotos!

In part 2 Liza expounded upon The Dreaded Font Rules in this post.

Today she discusses how to solicit feedback, and how much of a time sink the process of creating one's own book cover can be.

Getting feedback before the cover is final:

Once you’ve finished your custom designed book cover, unique to the world, with legible fonts, only costing (for me) about $7-$15 (cost of photos and shared cost of Adobe program [and be prepared to pay a LOT more than that for pics if you don't catch a sale ~ kih]), an easy way to get advice and comments on it is to put it up on your Facebook page. More than likely you’ll have several cover designers among your friends and they’ll tell you lots of stuff they don’t and do like. You’ll also get an even greater group of authors and readers stating which they like, but often they don’t mention why they like it best, but remember, since readers are your consumers, their opinions matter a great deal.

Normally, I create several covers. If you give them just one choice, your feedback may not be as accurate. Frequently, after days of voting, the best choice is NOT always clear. (This could mean both are equally horrible or wonderful. So try to wheedle out which.) If both are wonderful, go with your favorite, since you know your story the best. And remember, NO cover will appeal to everyone. However, a great cover will appeal to most in your genre and that’s all you can ask for.

And how much time will you spend working on covers?

It depends. Buying pics can take a lot of time. I buy mine once a year, but you may prefer to buy as you go, which could cost significantly more on a per picture basis.

You will also have to spend time learning to use your software. I spent several hours each day for three months working through all the tasks in the how to use Photoshop book I bought.

Normally, I can create a complex cover in two hours. But then I will tweak it for a week before I slap it up on Facebook for opinions. However, some books defy me at every turn. Thus, in one situation I have probably spent well over a month of labor creating a great deal of book covers for a single novel: The Darkest Days.

Last year, I probably made about a hundred covers and this year I made even more. Honestly, some covers I like on my first try and that’s it. For other covers I’ll go through endless pictures and designs because nothing suits me. And of course, there are those times that all I need to do is merge the picture with another, slap on a title and I’ve got my perfect book cover. That’s rare, and beware, if you don’t change the pictures you bought in a material way, then someone else can and probably will turn up with a very similar cover to yours.

Because of that, I recommend you avoid the handsome guy you’ve seen on thirty other covers, or at least do something to make him different. Enhance him or change his eye or skin color. You can also alter his hair color, but that is not always as easy as it sounds, depending upon the program you are working from.

And in one case, I thought I had changed the cover sufficiently, but another sci fi author just published a book that looks remarkably like mine, (which I made two years ago) and so when it comes time to publish this novel, it will need another cover.

If you want to view all my published covers, go to my author page on Amazon. The only book covers which aren’t my creations are the first three books of A Long Road to Love series and the paperback version of Ghost Lover.

If you want to read about my thought process while making covers for 2016, go here. 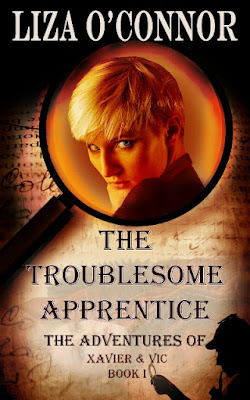 Liza O’Connor writes in several genres including Late Victorian, Regency, Contemporary Romance, Humorous Disaster Romance (which should be a genre), Sci-Fi and Sci-Fi Romance. Liza currently has eighteen novels, fifteen of which have covers designed by her.

The Troublesome Apprentice is the first book of my never-ending humorous Late-Victorian Sleuth series in which Britain’s greatest ‘real’ sleuth (Xavier Thorn) hires an apprentice who turns out to be female with the greatest intuition skill he’s ever known. Together they fall in love, behave outrageously, and solve a great deal of crimes while picking up fabulous characters as the series progresses.

Thank you so much, Liza, for all your wonderful words of wisdom!


***
Enter this giveaway for an autographed copy of
King Arthur's Sister in Washington's Court!