Max and Ellyn from The Druid Knight Tales by @RuthACasie #MedievalMonday 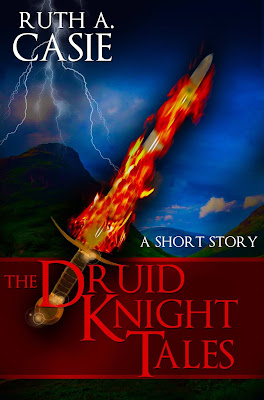 Medieval Monday Winter 2015-16 kicks off today, and this month's theme is the first encounter between the hero and heroine.

Today I am pleased to feature Max and Ellyn from The Druid Knight Tales, a short story by Ruth A. Casie.

Synopsis:
After a year of searching, Maximilian, the druid Grand Master, finds the sacred mistletoe destined for his soul mate shriveled and dead. He must journey to the Otherworld and tell the Ancestors of his failure.

Ellyn of Brodgar is an exceptional healer. But each healing kiss depletes her energy and brings her closer to death. Ellyn needs to find her own healing power before it’s too late.

“I thought they called out and I followed,” Max said.

“Who called out?” Ellyn asked.

“The Ancestors, of course. This is the shortest way to the standing stones. I was too eager. I knew something was amiss.” He winced in pain. “I should have listened to my own words,” he said between clenched teeth. “The Otherworld is not to be trusted.”

“Yes. There are traps and villains everywhere,” she mimicked his words. She opened the pouch she wore at her waist and removed a vial. “You must have slid down cliff on your back. The scrapes are deep.” Before she took care of his wounds she pressed her lips tenderly on his head, a kiss she was certain he would not feel. But his muscles twitched in response. She gasped in surprise at his reaction.

“I stepped onto the platform. It was fine.” He yawned. “But when I moved to the walkway the ropes gave way and I was falling through the air…” His voice trailed off and his eyelids slid closed.

She tenderly touched the rune tattoos on his back and gaped as each touch made them glow. She heard the tales of the magick runes but thought they were just that, tales. She stared at him, unable to say a word. She worked quickly, checking every scrape.

His wounds dressed and bandaged, she massaged his shoulders. When she was satisfied his muscles were relaxed, she gently prodded him to roll onto his back. The scrapes on his chest appeared to be minor.

Kneeling beside him, she ministered those wounds as well. When she was done, she sat back on her heels, startled. “Well, Grand Master, that is as much as I can do. The rest is up to you.”

“Aye,” he said sleepily, followed by a soft snore.

She wiped the blood from the scratches on his cheek and studied him.

Full brows framed his wide-set eyes with long, thick lashes. His high cheekbones accentuated the deep hollows beneath them. His close-clipped beard outlined his full lips. His face spoke of power and ageless strength. He had a face that was easy to look at.

The wounds cleaned and bandaged, she bent over and gave him a lingering kiss on his forehead. Her head snapped up and her fingers went to her lips. They tingled as if she had eaten something spicy. She searched his face. His ashen color hadn’t changed. Panic welled in her throat. Her healing kiss always brought results.

His arm snaked around her and drew her to him. She didn’t resist when he pulled her closer and kissed her deeply. When she moved away his eyes were closed, the corners of his mouth tipped up in a smile, and his face took on a soft pink hue.

Relief flooded through her but was quickly replaced with doubt. For the first time she wondered if her healing kiss would be enough.