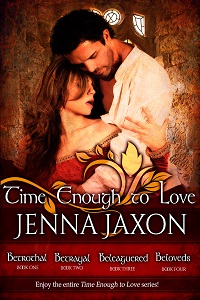 New on The Maze for Medieval Monday: the first kiss of the hero and heroine in Time Enough to Love by Jenna Jaxon!

“It has been decreed by His Majesty that on the first day the festivities will begin with a procession of ladies and knights of King Arthur’s court, starting at the Tower of London and winding through the town out to the lists. There are to be twenty-five knights on the king’s side who will joust and fight in a pas d’armes. So there needs be twenty-five ladies as well, to escort them to the field.”

She nodded again. “Princess Joanna rides in this procession.” Her part in the festivities had been determined last week. Did he have anything truly new to impart?

“You have been chosen to be one of the ladies.”

Alyse’s mouth dropped open and a thrill coursed through her. “But I am only Princess Joanna’s attendant, Sir Geoffrey. Usually such honors are reserved for the queen and Princess Isabella’s ladies, or the Duchesses and Countesses in the Royal Family. Why did they choose me?”

“Because I am to be one of the knights, and I begged a boon of the king to allow you to be my lady.”

She stared at him in shock, almost unbelieving, though she knew he would not lie about such a thing. To think she owed such an honor to the man she would soon call husband, that he had asked the king himself to grant the favor, made her heart beat an unsteady march in her chest. Alyse parted her lips to thank him when he swooped forward, secured her chin in his hand and kissed her.

Strangely soft, yet very sweet, his touch sent a searing bolt straight to her stomach, setting it afire. After moments that seemed an eternity, his mouth slackened on hers as though he would release her. Then he flicked the tip of his tongue across the hard-pressed seam of her mouth, testing for another invitation.

With a gasp she jumped back, drawing a chuckle from Geoffrey, who had the grace to glance around to make sure they had not been observed. “Be not discomfited, sweet. We are safe in our conversation.”

“’Twas not in our conversation that I feared harm, my lord.” Lord, ’twas difficult to sound outraged when she could still feel his lips on hers.

When Lady Alyse de Courcy is betrothed to Sir Geoffrey Longford, she has no choice but to make the best of a bad bargain. The hulking knight is far from her ideal man, and although he does possess some wit and charm, he is no match for the sinfully sensual man she secretly admires, Thomas, Earl of Braeton, her betrothed’s best friend.

From the first, Sir Geoffrey finds himself smitten by Lady Alyse, and, despite her infatuation with his friend, vows to win her love. When Geoffrey puts his mind to wooing Alyse, he is delighted to find her succumbing to his seduction. But when cruel circumstances separate them, Geoffrey must watch helplessly as Thomas steps in to protect Alyse—and falls in love with her himself.

As the three courtiers accompany Princess Joanna to her wedding in Spain, they run headlong into the Black Plague. With her world plunged into chaos, Alyse struggles with her feelings for both the men she loves. But which love will survive? 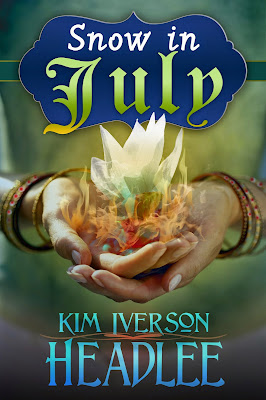