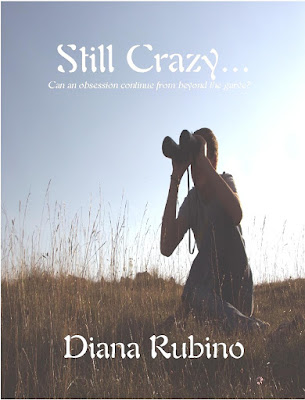 About Still Crazy by Diana Rubino:

Can an obsession continue from beyond the grave?

Alyssa Tyler and Clay Kearns are a hot item on the NJU campus until she’s expelled for protesting the Iraq war, and he must quit when he loses his grant. But the daughter of a U.S. Senator and the son of working class immigrants are a doomed mismatch. Their relationship suffers his jealous tirades, but she always goes back for more of his overbearing control tactics.

Amidst this turmoil, Alyssa falls in love with budding rock star Jeremy Knight. Jeremy is gay, but she’s convinced she can 'convert' him.

Alyssa balances Clay and Jeremy so delicately that neither knows the other exists, until they meet face to face—actually, bumper to bumper. Clay, stalking Alyssa, follows them in a high-speed chase that ends in Clay’s near-fatal crash with a truck. Stricken with guilt, she visits him in ICU and begs his forgiveness.

Her logical side knows Clay’s obsession with her is unhealthy, but she still carries this needy attachment to him. On one level, she’s flattered by all the attention he lavishes on her—the attention she never got from her birth parents, who abandoned her, or her adoptive parents, who palmed her off on abusive nannies.

As they pursue careers that take them to different states, they remain at a safe distance.

Alyssa meets her hero, Ryan Fulton, a sincere, compassionate human being who earns her trust and her love.

She catches a television show hosted by Kayla Shepard, a Ph.D. in clinical psychology. Dr. Kayla’s guests on this episode are a codependent couple. Alyssa feels as if she’s looking into a mirror. Stunned by what she’s just discovered, she contacts Dr. Kayla, desperate for her help. The doctor offers to take her into recovery for free if she’ll appear on the show.

During her sessions with the doctor, she relives her abandonment by her birth parents, her neglect by her adoptive parents, the abuse from nannies. The doctor asks if she’s ever been in an abusive relationship—yes. She’s also attracted to men she can’t have—her adoptive father, an old flame who joined the Navy, her gay heartthrob Jeremy.

Dr. Kayla explains all the symptoms of codependency—the repeated patterns of childhood, how she’s dependant on this behavior in others, in fear of rejection. Now she knows what her problem is, and continues treatment until her mental state is finally healthy.

Clay, now a successful partner in a brokerage firm, concocts extreme plots to stalk her. He snaps photos of her with a telephoto lens. He creates a false identity to friend and follow her on social media sites so he can keep tabs on her. She’s never far from his sight, even though she’s 250 miles away and engaged. His excessive spending on psychics and spiritualists drives his wife away. Through one medium, a Native American spirit guide convinces Clay that he and Alyssa are destined for each other for eternity.

In Clay’s most daring attempt to win her back, he tries to wreck her beach wedding by abducting her. His arrest and resulting prison sentence assure her he’s finally out of her life.

After he’s released from prison on good behavior, his spirit guide lures him to the Murray Springs Paleo-Indian Site in Sierra Vista, Arizona.

Now happily married to Ryan with three adopted children, Alyssa publishes her diaries as a memoir, to help other codependent women. It hits the bestseller lists, and she becomes a motivational speaker as she adopts several orphaned children from around the world.

Human remains are found in the Sierra Vista desert. DNA testing is inconclusive. Alyssa’s cell phone rings on the anniversary of the day she met Clay, at the exact time, 12:25 p.m., with a song. It’s 'Every Breath You Take' by The Police.


***
In 1989, author Diana Rubino took a detour from her usual genre and wrote a thriller about a stalking ex. It was set in the present, then, but over the years she updated and revised it many times. The primary market is new adults between 18 and 25 years of age.

It's Fatal Attraction meets Good Will Hunting as the story flashes back from the NJU campus to the present.

She brought her car in for servicing the next morning, parking in his lot next to a red and white taxi. Her mechanic called her a little after two. “Your car is ready, Alyssa. Hey, do you know you have a GPS tracking device attached underneath it?”

“What?” She shook her head, baffled. “I have a GPS in the dashboard, but not under the car.”

“Oh, yeah, you do. This is a tracking device. Somebody has a GPS and a dot will flash on the screen to show your exact location, as long as you’re within range. You want me to take it out?”

She instantly knew who this ‘somebody’ was. She felt as if a ton of bricks clobbered her square in the face. 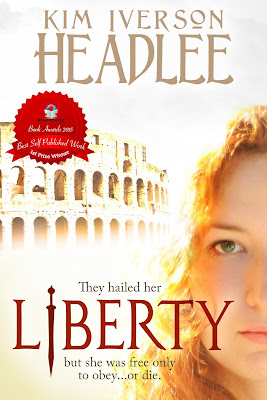