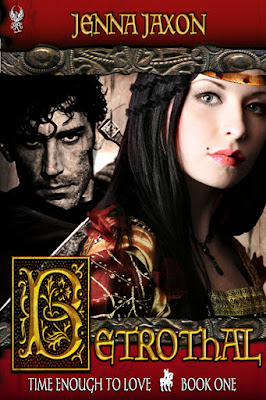 I am delighted to welcome back author Jenna Jaxon and her novel Betrothal for today's Medieval Monday installment on The Maze.

Synopsis:
Lady Alyse de Courcy has fallen in love with Lord Braeton, a nobleman in King Edward III’s court and a man to whom she has barely spoken. Fate, however, has decreed her betrothal to his best friend, Sir Geoffrey Longford—a handsome and imposing knight, yet hardly the man she wants to wed.

When Sir Geoffrey is bound in betrothal by his father, he could not have expected the beautiful stranger to win his heart the moment they meet. But Alyse’s infatuation with his friend casts doubt on whether she can ever return his regard and their wedding day is fast approaching…  Will he have time enough to win her love?

Excerpt:
As the champions met at the end of the Great Hall, the trumpeters sounded the fanfare once again. Alyse flanked Princess Joanna as she stepped forward, Lady Carlyle on her other side. The gentlemen came forward to claim their ladies and lead them into the middle of the Hall. The musicians struck up a stately carole, and the three couples formed pairs, one following the other, creating a line that moved gradually around the Hall. She and Geoffrey were the center pair and slowly trailed behind the princess and her partner.

Acutely aware that this was their first dance together, Alyse found it almost impossible to keep her eyes forward as propriety demanded. She darted glances at Geoffrey as they moved through the deliberate steps, her blood singing with each glimpse of his elegant figure. Hand and hand—the heat they generated threatened to set her ablaze—they stepped to the slow beat, now forward, now backward, slowly making their way around the Great Hall. Again, the yearning overtook her to belong to this man utterly and intimately. To be his in every way possible before it was too late. But for the grace of God, tonight could have been too late. He could have been killed today, and she would never have known the joy of belonging to him completely.

She wanted to remember every moment of this dance, to be able to savor each one later, but the flickering light, the heat of the chamber, the intensity of the music and her own thundering heart worked to make the dance a swirl of impressions—riotous and fleeting. When the music ended, Alyse’s head still reeled.

Geoffrey turned smartly toward her and bowed low, and she curtsied in return. Then he took her hand and kissed it. Her breath came faster, and her heart thudded in her ears as a full flush of heat rose in her face. The touch of his lips on her skin fought like fire and ice: she first burned then trembled as chills raced through her body. She barely heard the thunderous applause and cheers of the assembly.

FREE ON THE FOLLOWING SITES:
Barnes & Noble | Smashwords | ARe |

***
Enter for chances to win a prize in this massive multi-author giveaway!
a Rafflecopter giveaway 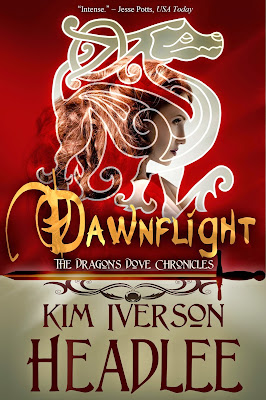