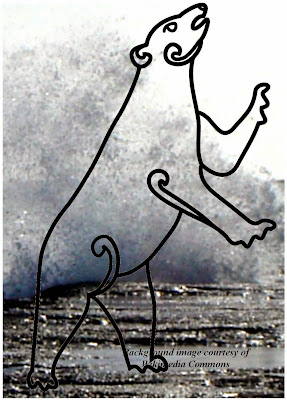 The people inhabiting what is now known as Scotland are largely descended from a Celtic race who once had inhabited Ireland. These folk landed on and near the Kintyre Peninsula beginning some time in the latter years of the AD fifth century, and gradually spread inland from there.

The reasons for this migration have been lost to us, but in my Dragon's Dove Chronicles series I attribute them to a combination of warfare with another race, and the economic pressures of a population increase.

And I couldn't resist adding the political twist, revealed in today's excerpt, that Urien invited the Scots onto his lands as yet another dig at Arthur and Gyan.


Amid the roar of mirth, as Gawain stepped up to the dais to claim the traditional victor’s meal of honey mead and the boar’s haunch, a Scotti woman joined him. Her beauty—in particular, the way her full breasts strained against the fabric of her silver-embroidered black bodice, bulging above it as if they might win free at any moment—made him forget any questions he might have had about her intent.

Gawain marveled at that response; three days of feasting and bedding his wife seemed to have done much to mellow the chieftain’s humor. This was just as well, he mused, since he would gut Urien if any harm ever came to his aunt at her husband’s hands. Then Arthur could have what was left.

The Scotti woman opened her stance so her words could carry to the crowd too. “I be called Caitleen, and this fine lad”—she laid a hand on Gawain’s shoulder and glided her fingertips down his arm, igniting a trail of tingles beneath her feather-light touch—“has bested me husband in a fair match. In keeping with the traditions of our people the Scáthaichean, Chieftain Urien, I request the boon of presenting his victory meal.”

Urien appeared to ponder her request as he took a pull from his gold-embossed silver goblet. He commanded a refill from the maidservant standing behind his chair, and saluted Fergus’s wife with the full goblet. “Fairly spoken, Lady Caitleen. I am pleased to grant this request… to the wife of Clan Moray’s newest ally and neighbor.”

All the guests seated at the high table swiveled their heads toward Urien. All but Morghe wore a frown. A glance at the feasters sitting at the lower tables revealed their abrupt disinterest in the food.

Urien laughed. Morghe beamed. Merlin and Ygraine looked thoughtful. Niniane, seated beside Merlin, closed her eyes as if in a brief prayer.

To Gyan and Arthur, Urien said, “Indeed. Ceding a few hundred hides of Moray land to Fergus’s clan is but a small price to pay for lasting peace with the Scots.” Smiling, he nodded toward Lady Caitleen. “That is to say, the Scáthaichean.” Her smile broadened.

Gawain couldn’t miss the emphasis Urien had placed upon the word lasting. To judge by the deeper frowns, neither had anyone else.

“And who shall pay the price when these—Scáthinaich”—Gyan used the Caledonian equivalent rather defiantly, Gawain thought—“outgrow their few hundred hides?” She lowered her eyebrows. “Argyll?”

Urien slapped his hand over his heart. “Chieftainess Gyanhumara, you wound me. I possess their profound assurances that they shall be model tenants. Don’t I, good my lord Fergus?”

“Aye!” thundered the man who was foster brother to one of Arthur’s most dangerous enemies. Fergus, who had donned his fine tunic while his wife had been presenting her request, grinned at Gyan. “The chieftainess should well recall that I be a man of me word.”

“I pray that your word has gained in value since the last time I encountered it,” she said. Arthur’s brief but consternation-laden stare went ignored as she busied herself with her goblet. Gawain bit his lip to hide his grin.


***
Enter this giveaway for an autographed copy of
King Arthur's Sister in Washington's Court!