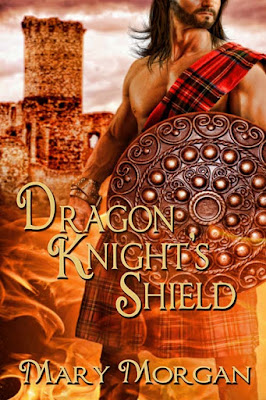 Synopsis:
Angus MacKay, leader of the Dragon Knights, failed his brothers and his clan upon the death of his sister. Now he must fight the darkness of despair tempting his soul. Back on Scottish soil, he comes face to face with Deirdre who can wield a sword as mightily as his warriors, and he takes her captive. Yet, with each passing day, the fire dragon inside him roars to claim the one woman fate has destined for him.

Famed mystery writer, Deirdre Flanagan, is unprepared for the next chapter in her life. On a vacation to Scotland, she steps through the mists and enters into a skirmish alongside a Highlander. However, the fight has only begun, and now she must battle Angus as well as evil in order to claim the love of this Dragon Knight.

Will their love be powerful enough to shield them from danger, or burn them to ashes?


Excerpt:
Several other minstrels picked up their lyre and harp and started to play as the feasting began.

“Would ye care for the venison, Deirdre?”

“Gosh, yes! I’m starving.” Feeling a bit lightheaded, she inhaled the aroma of the meat mixed with onions. “Smells divine.”

As she scooped up a portion with a piece of bread, she closed her eyes, savoring the flavors. Upon opening them, she found Angus staring at her. Taking his finger, he wiped away some of the juices on her cheek and licked them off. Feeling the heat prickle her face, she reached for her mug and downed its contents.

Chuckling softly, he continued to focus on his own meal.

When she could eat no more, she spied a dark looking dish near Cormac. She nudged Angus. “What is that?”

“Ahh…’tis a favorite of mine. Plums in wine and spices. Would ye care to taste them?”

Stretching forward, Angus brought forth the dish. Dipping his finger in the bowl, he held out the plum in front of her.

“Umm…you don’t expect me to lick the fruit off your finger?” Deirdre looked around, thinking all eyes were on them.

“Dinnae worry, just taste.” The husky burr of his voice causing her nerves to tingle with excitement.

Slowly, she ate the delectable fruit from his finger. “More,” she demanded.

“Ye are bonny to watch,” he whispered against her ear. Swiping an even bigger piece, he literally shoved two fingers into her mouth. This time she trailed her tongue along his fingers and heard him growl.

Cormac coughed, and she quickly turned away. Another minstrel started to play a lute as he strolled among the tables. His song was one of lost lovers and Deirdre became entranced by his singing. Approaching their table, he paused, letting his fingers glide over the strings.

His eyes met hers as he sung, “The wisdom of the lovers’ hearts can be lost within the reason of the mind—forever adrift and never to be found again.” His last words of the song struck a chord within her, causing her heart to ache. How foolish she had been.

As she watched him slowly walk away, she felt Angus’s hand covering hers. When she looked into his eyes, she knew without a doubt that love had truly claimed her heart for the first time in her life.