#EggcerptExchange: Sink or Swim by @stacyjuba 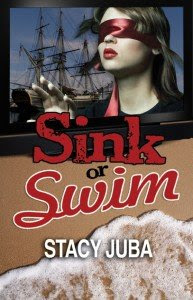 Blurb: How do you change the channel when reality TV turns to murder? Personal trainer Cassidy Novak has gained fame for starring on a hit reality show. Not only does she lose and have to walk the plank, but upon returning home, Cassidy discovers she is being stalked. As her former competitors get killed off, Cassidy refuses to play by the stalker’s bizarre rules. She’s also being shadowed by photographer Zach Gallagher, who has been assigned to capture her personal moments for the local newspaper. She wants to trust Zach, but fears he may not be as nice as he seems. When the stalker forces a showdown, Cassidy must walk the plank again – this time for her life. Sink or Swim was a Nook Top 20 Bestseller and was a Nook Mystery Bestseller, and was also a #1 Amazon Kindle Bestseller in the Women Sleuths and Romantic Suspense categories.

Eggcerpt:
Cassidy sat poised in her chair as former contestants filed onto the soundstage at WBC in New York. Together, the studio audience and television viewers had watched the recorded footage of her walking the plank. Gabriel would now interview the competitors from the inaugural season one final time. More importantly, he would announce her prize. If it erased most of her debts, then it would at least make this whole embarrassing experience worthwhile.

Cassidy’s heart kicked in her chest and sweat moistened her brow. As one of her old teammates entered, her heart rate skyrocketed for a different reason. Josh Sanchioni slid into a bucket seat, carrying himself stiffer than normal in his sharp gray suit. Studio lights caught his sunbleached strawberry blonde waves, brightening the reddish gold tints.

Cassidy slipped her gaze to his leather shoes. If Josh hadn’t been engaged, they could have been an item. Instead, they’d been good friends until that one evening when the cameras were off and they almost kissed. They’d both realized their mistake and backed away. Things were strained until Josh walked the plank a week later. Tonight, not only did Cassidy have to face Josh, she would probably meet his fiancée.

Her cheeks heating, Cassidy focused on the competitor beside Josh as a distraction. Adam Horton sat erect, hands folded in the lap of his olive green khakis. He wasn’t military, but he dressed like an Army wannabe. His reptilian eyes drilled into Cassidy, his angular face revealing the shape of bones underneath. A blond goatee darkened his pointy chin. Cassidy shuddered involuntarily. Adam never said much, but he made her uncomfortable just the same. She’d sense someone watching her on the ship and Adam would be lurking in the hatches. Luckily, he only lasted on the show two weeks.

“Before we catch up with our former contestants, I’d like to congratulate Cassidy on a job well done,” Gabriel said in the middle of the circle.

Applause thundered from the audience and a wave of excitement crested over her. Cassidy offered a smile for the cameras as Gabriel finished, “I’m proud to present you with your prize – a luxury vacation for two to the Bahamas on a real cruise ship with $3,000 spending money!”

Dumbfounded, Cassidy watched as a video depicted a majestic ocean liner on the large TV screen. “Set sail with us to the Bahamas, where you can swim with dolphins in turquoise waters, relax on sugar white beaches and explore the island’s history as a haven for pirates,” said the female announcer in a voice-over. “On your voyage, you can enjoy our ten lounges, two outdoor pools, luxury spa, casino, cinema, dynamite shows, and glass walls and elevators that get you up close to the ocean views.”

Another boat? More ocean views? Were they friggin’ serious? A frozen smile hovered on Cassidy’s lips. Too bad she’d already seen the counselor that afternoon and he’d attested that all her screws were still in place. This travesty might be enough to unhinge her.

And comment on this post for a chance to win an e-copy of Dawnflight by Kim Headlee... enter often throughout the Eggcerpt Exchange!