Today I am pleased to help Author Jude Liebermann promote her latest release, hot off the press! (In more ways than one, apparently. ;-) 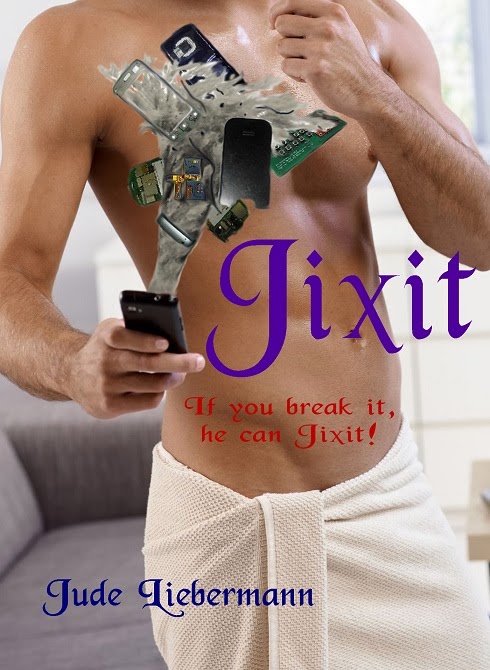 Colin Jix is a loner. He’s had to be, so he lives in a remote mountain town where he limits his contact with other people.  He’s settled into his solitary life and resigned himself to be alone. That is until Dot Tate shows up with a broken down car and needs his help.  Neither can fight their immediate attraction, but then he discovers a tragic secret and must step outside his comfort zone to make things right.

A persistent knocking woke him early the next morning.  Disoriented and still tired from lack of sleep, he rolled off the couch and stumbled to the door.  Without thought he pulled it open with a yawn and then froze, suddenly remembering he never opened his door to strangers as well as making sure he was completely dressed first.  As the cool air from the hallway hit his naked chest, he realized he still wore the towel from his shower the night before.  Her scent on that unwelcome air hit him harder, and he covered his crotch with one hand and slammed the door shut with the other.

Dot was left standing in the hall, staring at the door, but that’s not what she saw.  The vision of Colin in only a towel would be forever imprinted on her retinas.  Her mouth fell open at those muscles, and the hair lightly sprinkled on his chest and abdomen, disappearing beneath the low riding towel.  His tattered uniform and all that grease had hidden much more than she could have hoped for, and she licked her lips.

“Oh my!” The breath rushed from her lungs, before she sucked it back in and knocked on the door again.

“Yeah, hold your damn horses!” His muffled shout replied from a distance.

Her instincts told her to get the hell out of there. She’d already embarrassed him, and she didn’t want to make it worse, but she knew she couldn’t leave without at least apologizing for taking him so unaware. She thought mechanics always got up early. Glancing at her watch, she winced, having read the time wrong.  It probably was too early to show up at a man’s home, especially one she barely knew.

Dot took a few steps away from the door and waited.  His agitation came through the wood in muffled curses, and she clenched her fingers together behind her back.  When the door finally opened again, black covered Colin from head to toe.  The only bit of skin visible was the part of his face the knitted cap and matching scarf didn’t cover.  She frowned, wanting to see his hair without all that grease, and she missed that opportunity earlier when she couldn’t tear her eyes from his muscular chest and arms.

His whole body blocked the doorway as he glared at her.  “How did you know where I live?”

She gave him what she hoped was her most charming smile.  “So I guess you’re not going to invite me in?”

His objection to that suggestion shone clearly in his disgruntled features.  “I was actually on my way out.”  He closed and locked the door behind him and then marched past her to the stairs.  “I thought you understood that your car won’t be ready for at least a week.”

Dot stared at his ass, wishing his jeans were a bit tighter.  “Of course you made that clear.  I was having breakfast at the diner and mentioned how my phone switches off for no reason. The waitress mentioned you.  I actually think she has a crush on you.”

Colin stopped half way down the stairs and looked over his shoulder at her.  “You mean Rose?”

She nodded, unable to keep the humor from showing in her grin.

“Rose has a crush on every eligible man in the whole town.  I’ll have to talk to her about giving out my address to strangers though.”

Dot raced down the stairs and stopped in front of him.  “I’m not a stranger.”

He stared down at her, his expression unreadable, and she tried not to fidget under his intense scrutiny.  He held out his gloved hand to her, and she stared at it, unsure what to do.  Did he want to hold her hand?  A warm rush flowed through her body at the thought, even though she wouldn’t be holding his bare hand.

“Oh, of course.” She couldn’t stop the nervous giggle that escaped as she scrambled through her purse in search of her cell phone.  Once found, she placed it in his gloved palm.

Colin stared at it for a moment, and she saw uncertainty cross his face.  Finally, he pulled off one glove and cradled the phone in his fingers.  She could only stare in awe as his expression changed, as if he no longer saw the phone but something bigger, and his eyes scanned the empty air above his palm.

He blinked a few times and then refocused on her.  “I’ll walk you back to the diner.  I should have your phone fixed by then.”

Without another word, he passed her on the stairs, and she had no other choice but to follow him.

Available for pre-order at Barnes & Noble and will be soon at Kobo Books and iTunes, but you can view it and read the first chapter now on Smashwords.com. April 11th is the official release date when it will be on Amazon.com.

And comment on this post for a chance to win an e-copy of Dawnflight by Kim Headlee... enter often throughout the Eggcerpt Exchange!