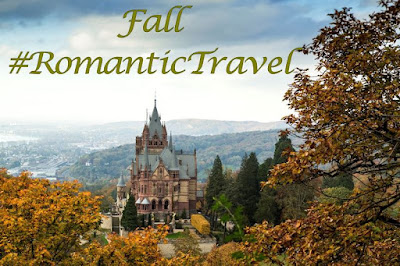 Today please put your hands together for longtime Maze contributor Linda McLaughlin, who offers her thoughts about traveling to Quebec and whose novel Rogue's Hostage features 1750s Quebec.

Quebec is one of the most romantic cities in North America, seeming more European than North American. It’s also one of the settings I used in my French & Indian War-set historical romance, Rogue’s Hostage. When I was writing the book, my husband and I took a vacation to Quebec Province so I could do some research. We started in Montreal, where I managed to figure out how to navigate the Metro using my college French.

After a few days exploring Montreal, we took the train to Quebec, and I fell in love with the charming old city, though I had to keep reminding myself that the setting in my book was the previous city, the one that was destroyed by the British shelling. I was particularly interested in visiting Notre Dame des Victoires, the small church in Lower Town which was destroyed in the shelling, but later rebuilt in the same style. In the book, Mara seeks comfort inside this lovely little church.

Since I wanted to stay in the old part of the city, I booked us a room at Chateau Frontenac, the venerable Canadian Railway hotel. Picturesque setting, but we were pretty sure they gave us the smallest room in the place! Instead of a view looking out toward the river, our window looked down onto an alley. Ah, well, we didn't spend much time in the room anyway. We were far more interested in wandering the winding streets, taking pictures of the old houses and the fort and battlefield.

On the last day we took a boat ride on the St. Lawrence for spectacular views of the city and countryside. What a beautiful area! I'd love to go back some day.

Synopsis:
His hostage...
In 1758 the Pennsylvania frontier is wild, primitive and dangerous, where safety often lies at the end of a gun. Mara Dupré's life crumbles when a French and Indian war party attacks her cabin, kills her husband, and takes her captive. Marching through the wilderness strengthens her resolve to flee, but she doesn't count on her captor teaching her the meaning of courage and the tempting call of desire.

French lieutenant Jacques Corbeau's desire for his captive threatens what little honor he has left.  But when Mara desperately offers herself to him in exchange for her freedom, he finds the strength to refuse and reclaims his lost self-respect. As the shadows of his past catch up to him, Jacques realizes that Mara, despite the odds, is the one true key to reclaiming his soul and banishing his past misdeeds forever.

The journey was almost over.

Eyes narrowed against the glare off the water, Jacques stared at the approaching skyline of Quebec as the bateau rushed downriver. Perched on the north side of the Saint Lawrence River, the city’s walls and fortifications guarded the way into the interior of New France. Though the British had tried twice, the city had never fallen. But Jacques knew that sooner or later they would try again.

He glanced at Mara, who sat beside him, huddled in her shawl, shivering slightly. When he put an arm around her and pulled her closer, she burrowed against him. Guilt and regret stirred inside him. She was the reason he had requested a transfer back to Quebec. Since leaving Fort Duquesne, she had been a different woman—quiet, submissive, and obedient.

To his surprise, he missed her sharp tongue and pointed opinions. All through the long Canadian winter, he had watched and waited for her to revert to her normal self, but it was as if she were a different woman. On occasion, Jacques had been tempted to bait her, but his guilt kept him from doing so. Her state of mind was his fault, after all.

In the last four months, she had followed him over a route seen by few white men, much less a woman. Together they had traveled by bateau, canoe, sled, and snowshoe. Mara had witnessed the mighty power of Niagara Falls, traversed Lake Ontario, and braved the Lachine Rapids—all without complaining. But also without any sense of wonder or enthusiasm for the places she’d seen, just a wistful remark about how much Emile would have liked to see the falls.

It had been an arduous journey, and now she deserved some comfort.

A raw wind off the river threw pellets of rain in his face, and he pulled up the woolen muffler Mara had knitted for him. That was all she had done at Niagara, her needles clicking incessantly until he had thought he would go mad. But something about the rhythmic nature of the task seemed to comfort her, so he’d said nothing.

Another blast of wind reminded him of how long and severe Canadian winters could be. In this northern country, rivers and lakes froze over completely. There was a wild beauty in it that he used to find exhilarating. Until an equally impervious chill took up residence around his heart.

The bateau docked at the part of the city called Lower Town, below the cliffs of Cap Diamant. Above them towered the ramparts guarding the government and church buildings that comprised Upper Town. Jacques helped Mara onto the dock and led her down a street lined with warehouses and taverns. He stopped in front of a sign picturing a leering devil with a forked tail.

“Le Diable? What are we doing here?” she asked, a surprised look on her face.“This is home, madame. Welcome to my humble establishment.”