The Business of Writing: Better Tweets for Your Books! #MFRWOrg #ASMSG #IARTG 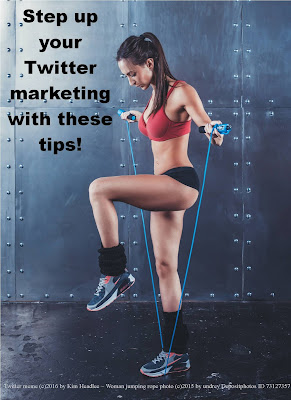 Today I'm diving into the nuts and bolts of creating better tweets for your books.

If you're just getting started, you can read some solid general tweeting advice (if a bit dated, since Twitter has abandoned its longer-tweet plan, and thank heaven for that mercy) by Teena Thach for the Socedo blog.

For those of you who have been around the Twitter block a time or two, I invite you to consider the following examples.


Does that tweet induce you to click on the book's link? Maybe, if you're already a fan of the series or are familiar with the author's other work.

Better: aim for a unique, intriguing hook, such as:


Even a small town with a stupid name like Horsenose can have big-city drama.
WIL'S WINTER: 5 Yrs Later by @1975Okame http://www.amazon.com/exec/obidos/ASIN/B00OE9QVG0/systemsupportser


Note that I had to shorten the subtitle and didn't have room for the author's name. I prefer to embed my Twitter handle (@KimHeadlee, and thanks for the follow! :) in my tweets whenever I have room for it so I can track its reach. But then I was fortunate enough to claim a Twitter handle that's recognizable as my name.

The other issue with the tweet in Example 1 is that the shortened link expands to point to the paperback edition of the book, rather than the Kindle edition I coded into my version. That's not a "Twitter sin" per se, but I've learned that most customers will be more likely to impulse-buy the less expensive digital version rather than paying far more to kill a tree.

Note also that I didn't bother to shorten my link. That's because Twitter dedicates 23 characters to a link regardless of its length. If you don't believe me, try it!

Okay... so we've got a romantic comedy-adventure story. What's the title? Removing the extra space between the link and the hashtag leaves 28 characters in which to give the title. Potential customers need to see an item at least seven times before deciding to buy it. They won't know what to buy if you don't tell them!


INVISIBLE CHILD is about a boy who is hidden and then abandoned by parents @GolondrinaBooks http://amzn.to/1URVEcl

When I see passive voice in a tweet, I wonder whether the book was written that way too. To solve that problem, I would rewrite the tweet as:

What happened to @GolondrinaBooks's INVISIBLE CHILD, who was hidden then abandoned by his parents? http://amzn.to/1URVEcl

Note that I reworded the hook as a question that cannot be answered by either "yes" or "no."

Why? The yes-or-no question is the weakest form of writing because it's the easiest to dismiss. You do not want to give potential readers any excuse to dismiss your books!

Of course you can also incorporate review blurbs and excerpts in your tweets.

In every case, select language designed to engage and entice your readers.