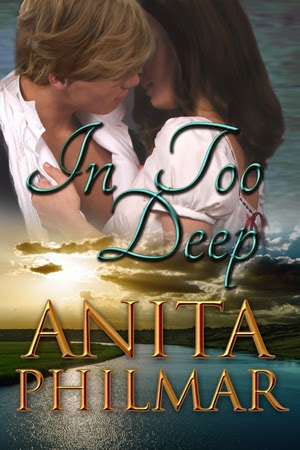 In Too Deep
On the banks of the Trinity River, Sadie Pepperman is looking for a chance to escape the demands of her in-laws. With her husband dead, they want her to marry her brother-in-law so they can take control of her farm.

Suddenly, the peace of the day is shattered when her best friend steps too far into the river. Rushing to save her, Sadie meets a handsome stranger that ignites her dormant lust. She sees her friend rescued by a steamship and backs away from Logan Jansen, only to turn her ankle.

The agonizing pain leaves Sadie with the inability to walk. Needing help, she offers Logan a place to stay if he’ll help with the chores on her farm. With his agreement, Sadie adds another problem to her list. Now, not only does she have to worry about how to bring her crops in from the field and run her farm alone but she also has to fight her attraction to Logan.

Can Sadie end her in-laws’ interference in her life, run her farm alone, and give love another chance?

“Are you a friend of the woman who is drowning?”
Unable to certain what to say to the stranger, she nodded and worked to clear the lump in her throat. How did this man know about Carolyn?
“Move over. I’ll drive. If we hurry I should be able to save her and my friend.” He placed a foot on the side step of the wagon and crowded onto the bench.
She quickly scooted along the wooden plank, allowing him room to settle beside her. Long fingers closed over the reins and he tugged the leather from her grip.
He didn’t wait for an answer. Lifting the reins, he released the brake.
A loud whistle sounded from the river, followed almost immediately by the slapping of paddles against the water.
The man clicked his tongue to encourage Beauty to get moving. He drove the wagon closer to the edge of the river, creating a rough new trail.
Bouncing on the seat like a rag doll, Sadie tried to keep her distance from the man, even though the task was next to impossible with the constant swaying of the wagon. She continually brushed against his arm, shoulder and thigh. A particularly hard bump almost landed in his lap.
“I’m sorry, but you need to slow down,” she complained and straightened.
He drew back on the reins; the wagon rolled to a stop. His head turned in the other direction. He shifted away from her and jumped down from the wagon before she repositioned herself on the bench. “Damn that steamship. They’re rescuing them.”
A little stunned by everything that had happened, Sadie lifted a hand to her throat. Her gaze stayed locked on Logan until his comment finally registered. She glanced at the water and noticed a steamboat cruising down-river. A line hung from the side with two people hanging from the end.
She scrambled off the wagon to keep the boat in sight as it moved farther away. “Oh, no, where will it take them?”
“Probably to the next port, maybe Liberty or on into Galveston.”  When the steamboat rounded a bend and drifted out of sight, the stranger turned. His gaze grew in intensity as he scanned the length of her body. “I’m Logan by the way.”
Burned by his steady regard, Sadie glanced down at her attire. Heat stained her cheeks. The ribbon on her camisole had worked its way loose and the swell of her breasts lay exposed to his view. She’d been about to redress when Carolyn fell into the river. Lifting her hands automatically to cover herself, she bowed her head.
What should she do now?

Purchase In Too Deep at: Smashwords | Amazon


And comment on this post for a chance to win an e-copy of Dawnflight by Kim Headlee... enter early and often throughout the Eggcerpt Exchange!