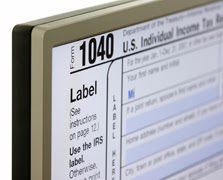 Today's post is a public-service announcement for owners of older computers upon which they are trying—and failing—to install TurboTax 2013 software.

My household boasts several computers, the oldest being an XP desktop model that I have used for running TurboTax pretty much since XP became a stable operating system, well before the days when Vista became a gleam in anyone's eye. This is the computer that gets exposed to the Internet the least, and therefore it's my go-to choice for having to deactivate the antivirus software just to get other programs like TurboTax to install.

Understand that I have been running TurboTax far more than usual lately, because my late father-in-law left the legacy of three years' worth of unfiled income taxes to have to square away. So perhaps my nerves are a bit more raw than usual in this regard. In any case, I was not pleased to see "Windows Installer Error 1603" while attempting to install the 2013 edition of TurboTax for Business, since the filing deadline of 17 March for my S Corporation was looming. This error happened not once but twice—the first time I hadn't shut down the antivirus software as I should have done—and it entailed an inordinate amount of wasted time as TurboTax rolled back the installation.

After giving myself a day to simmer down, I found the following link via Intuit's virtual help center: Error 1603 fix. Steps and links to the various patches are listed there if you need them. But wait, there's more.

I have been programming computers since the days of toggle switches (four decades at least), and when Step #1 directed me to a site for downloading a European Union FONT extension for an OS-level fix, I said, "Wait. What??" But it was a Microsoft site so I clicked the "Download" button... and got a page that read only "Bad Request" in letters so tiny they seemed apologetic. As well they should have been.

Hoping for the best anyway, I followed the instructions in Step # 2—which seem daunting but in actuality are very straightforward, and I downloaded & installed the Business patch.

Four decades of computer programming have taught me to hate having to watch an installation "thumbsucker" bar with my heart in my mouth, and it certainly kept leaping there even after it passed the dreaded 31% mark, the point at which the installation had failed twice before—it ground to a near halt at 51% and again at 74% before the TurboTax and Windows gods deigned to smile upon my efforts.

The bottom line: Don't bother with Step #1, which doesn't work.

The only question remains whether I need to install the patch for TurboTax Deluxe when I get ready to compile the tax records for my household and my father-in-law's estate. If I'm feeling brave that day, I may just try to install it without taking that step. I will let you know what happens either way.
Posted by Kim Iverson Headlee at 16:32