One of the greatest stories in the history of literature involves a man with a vision to unite his people against all who would strive to plunder and destroy their way of life. This man was blessed with staunch allies and cursed with bitter rivals. This man sought neither glory nor accolades, though he would win both through his battlefield victories. This man sought no bedchamber conquests, though no shortage of women would offer themselves to him. In the secret depths of his soul, this man sought only the one woman who could help him usher his vision for a united land into reality.

For centuries, literature has named this man Arthur.

For decades, I have named the woman Gyanhumara.

Their courage, their wisdom, their mistakes, their strength, and their love would forge the destiny of their world.

Their story makes us greater. 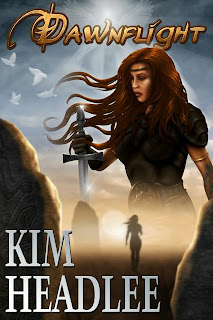 Title: Dawnflight
Series: The Dragon's Dove Chronicles, Book 1
Author: Kim Headlee
Publisher: Lucky Bat Books
Description: Gyanhumara “Gyan” nic Hymar is a Caledonian chieftainess by birth, a warrior and leader of warriors by training, and she is betrothed to Urien map Dumarec, a son of her clan’s deadliest enemy, by right of Arthur the Pendragon’s conquest of her people. For the sake of peace, Gyan is willing to sacrifice everything...perhaps even her very life, if her foreboding about Urien proves true.

Arthur map Uther is the bastard son of two worlds, Roman by his father and Brytoni by his mother. Denied hereditary rulership by the elders of Chieftainess Ygraine’s clan, Arthur has followed Uther’s path to become Dux Britanniarum, the Pendragon: supreme commander of the northern Brytoni army. The Caledonians, Scots, Saxons, and Angles keep him too busy to dwell upon his loneliness...most of the time.

When Gyan and Arthur meet, each recognize within the other their soul’s mate. The treaty has preserved Gyan’s ancient right to marry any man, providing he is a Brytoni nobleman—but Arthur does not qualify. And the ambitious Urien, Arthur’s greatest political rival, shall not be so easily denied. If Gyan and Arthur cannot prevent Urien from plunging the Caledonians and Brytons back into war, their love will be doomed to remain unfulfilled forever.


This book tour is brought to you by Release Day Diva